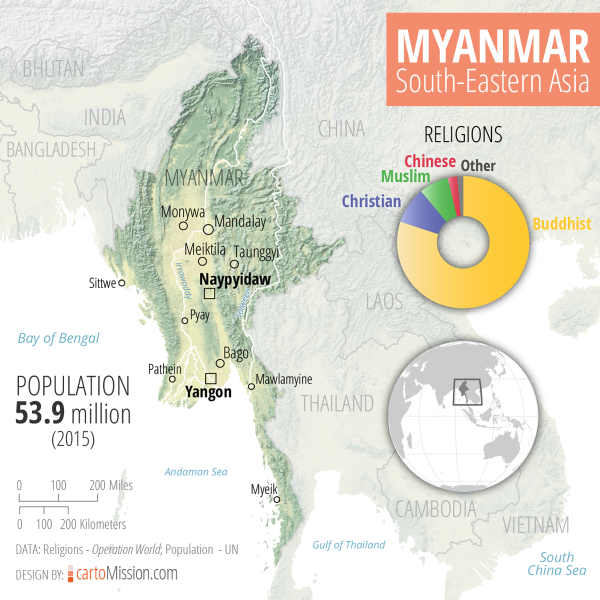 The majority of the 53.9 million people of Myanmar are Buddhist, according to Operation World. Christians make up about 9% of the population and Muslims about 7%. The largest cities include Yangon (the previous capital and current commercial center), Mandalay, Naypyidaw (the new capital), and Bago.

The Rohingya people are currently experiencing persecution and violence (Sep 2017) in Rakhine state (the city of Sittwe is the capital) on the west coast of Myanmar. Many refugees are fleeing into neighboring Bangladesh.

The Rohingya of Arakan, [are] Muslim descendants of Arabs, Moors, Moghuls and Bengalis who settled in Arakan 1,000 years ago. They are one of the most neglected and unwanted peoples on earth. They are denied citizenship and face numerous restrictions in their basic rights. Many have fled to neighbouring Bangladesh or emigrated illegally to other countries. There is little outreach to them. Pray for the few scattered believers.

Pray for the Rohingya people. The Muslims and Christians that make up this group are experiencing so many extreme emotions and trials right now. Pray for God to guide them from moment to moment, when they cannot even see beyond today’s sorrow. Pray that they would be given favor and that all their needs would be provided for in this turbulent time. (Open Doors USA, 19 Sep 2017)

Rohingya Believers. Our hearts are specifically for our brothers and sisters within the Rohingya people group today. There are Christians trying to live out their faith despite this extreme persecution that their entire people group is facing. May believers be given favor with those around them, to make the gospel beautiful despite the sorrow that surrounds them. May they be given opportunities to share of their hope to those around them walking in darkness and uncertainty. (Open Doors USA, 5 Sep 2017)