As conflict continues in Iraq and Syria, the Kurdish people have been highlighted in recent media reports. In Syria, the primarily Kurdish town of Kobane near the border with Turkey has come under attack from Islamic State (IS). Kurds have taken control of other regions of Syria in the on-going civil war in that country. In northern Iraq, the Kurds have an autonomous region with a regional capital at Erbil. The Kurdish defense forces have fought IS advances in the region. 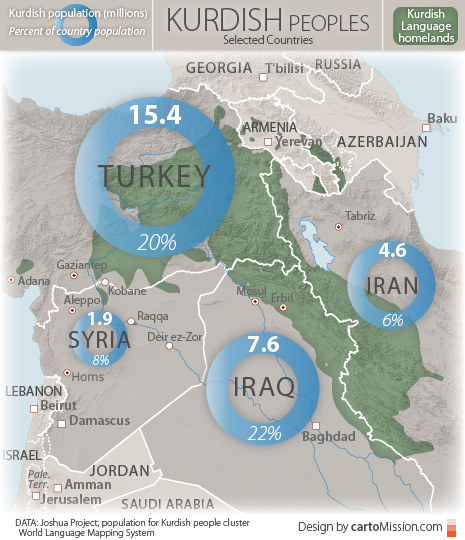 The four countries highlighted on the map have the largest population of people groups in the Kurdish cluster in the world. Turkey has 15.4 million Kurdish peoples, making up approximately 20% of its population. Next, Iraq has 7.6 million Kurdish peoples (22% of the country population), followed by Iran (4.6 million, 6%) and Syria (1.9 million, 8%). The map also show the location of the language homelands for three main Kurdish languages: Central Kurdish, Northern Kurdish, and Southern Kurdish.

For prayer information on Kurdish people groups from this region, please see the following list from the Joshua Project.