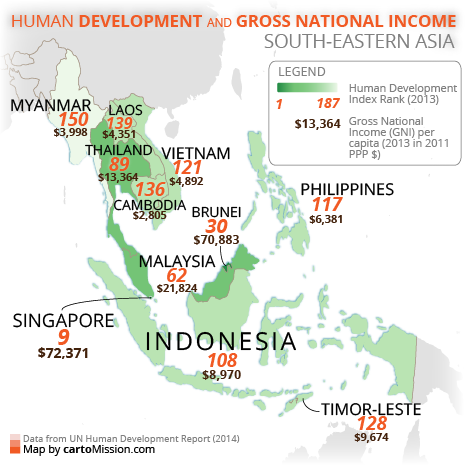 In South-eastern Asia, development varies greatly in terms of geography. The Human Development Index is calculated by the UN and is described as “a composite index measuring average achievement in three basic dimensions of human development—a long and healthy life, knowledge and a decent standard of living.” The variables used are life expectancy, years of schooling, and gross national income, per capita. On this map with data from the 2014 report, Singapore, a center for business and trade, stands out as the most developed of the 11 nations in South-eastern Asia. Brunei is also very wealthy, with hydrocarbons making up 90% of exports according to Operation World. The bottom three countries in terms of development are Myanmar, Laos, and Cambodia. The largest country in the region by population, Indonesia, is ranked 108 of 187 countries in the world in terms of development, with a gross national income (per capita) at 12% of that of Singapore.